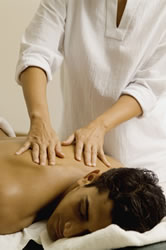 ​Dan Beard, Licensed Massage Therapist, retired from BellSouth in July of 1996 after 30 years of service. After seeing the transformative effect massage therapy had on his wife, Dan became interested in the healing elements of massage. In November of 1997 Dan graduated from Southeastern School of Neuromuscular Massage Therapy, Jacksonville, FL. Soon after graduating he opened a massage clinic in Saint Augustine Beach. In 2000 he moved to Fernandina Beach where he worked at Magna’s Salon, Amelia Plantation Health and Fitness Center and began doing house calls for the B&B’s on Amelia Island. Dan returned to Saint Augustine in 2003 where he worked for a local chiropractor and continued doing house calls at B&B’s in St Augustine. Dan began working with Dr. Moore in May of 2009, and continues to give our patients the gift of pain relief and relaxation.

Dan has been married to his lovely wife Patti for 27 years. He has 2 children, 5 grand children and 1 dog.